It is usual that pharmaceutical trademarks contain commonly used terms, so they are formed by the combination of elements such as prefixes, suffixes or commonly used words that evoke somehow an idea about the properties of the product, its active principles, and its therapeutic function. They also may refer to a component of the medicine or the organ for which they are prescribed. 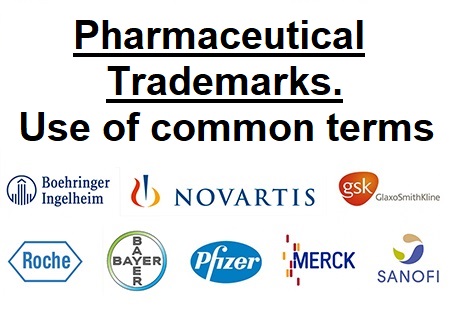 Terms are considered commonly used for two reasons: either for being part of the several marks or for being evocative of the product or any of its features. By common usage anyone is free to include them in a mark, provided that it is not confused with other marks of other owners.

For example, a prefix commonly used in Class 5 is the prefix CORTI that evoke the active substance corticosteroid or the word “cortisone”. The prefix CORTI is present in the formation of numerous registered trademarks owned by different owners, such as: CORTIFLEX, CORTIDERM 10, CORTIMED, CORTICREM, CORTIFENOL, etc.

The Court of Justice of the Andean Community has established in a precedent that the prefixes, suffixes, roots or endings commonly used in the marks cannot be subject to monopoly or exclusive use of a single person since they are usual words which use by the general public can’t be prohibited.

Usually it is argued that because the signs identify products that directly affect health and have consequences on the human body, the consumer will have a higher level of attention and special care when purchasing the pharmaceutical products. This has been recognized in diverse jurisprudence of INDECOPI where stated that "in the case of pharmaceuticals referred to the signs in question, it is reasonable to assume that the consumer, when purchasing such products, would make a close examination based on their needs ".

However this is not enough to dismiss the risk of confusion because in the pharmaceutical trademarks that share commonly used terms, whose names could prove to be very similar, the consumers themselves might be induced to confusion, i.e., it may acquire a product in the belief that it is purchasing another, which is known as direct confusion or might think that the product has a distinct commercial origin tan the real one, what is called indirect confusion.

It is therefore very important that pharmaceutical trademarks have additional elements added to the common term, whether figurative or verbal, with sufficient distinctiveness to identify and distinguish the commercial origin of the product to avoid the risk of confusion, as also prevent the sign to become descriptive because that would make it to not distinctive and therefore in consideration of the prohibition of registration of the Article 135 subparagraph e) of Decision 486 from the Andean Community which would make impossible their protection.